This post took longer than usual. It turns out it takes more than a day to figure out the best way to get wordpress or blogspot out of your url. I’ve always wanted to my own dotcom. Even if I will never let any advertising touch it. Ever. But back to Helvetica. I think somewhere at the back of my head I have been drawing closer each year to design. Then I saw this film and as happens often, I got obsessed. 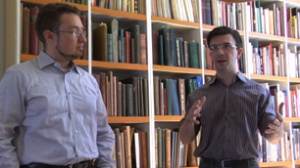 Jonathan Hoefler (above left) puts it so brilliantly in the film. He talks about the paucity of a rich vocabulary when it comes to talking about type. And how he needs to refer to everything from suspenders to old typewriters and coffee to adequately describe different kinds of type.

But I think he was just being modest. I think type can actually put us there. Next to the coffee, or the man in the local train. Not the words. But the type. I have seen type do that. I have seen designers, as part of their everyday job just pick up a word document and turn into this environment. Which you can breathe in and run your finger across. And its all so subliminal. You look at the words but your mind is taking in so much more.

Among the articulate geniuses who populated the documentary was a Michael Bierut (above), who did an analysis of how Helvetica changed American corporate identity. I must have rewound it and seen that part eight times, back to back. At the very least.

There is something about Serif fonts that just make me terribly nostalgic. Typefaces like Times New Roman. It is the typeface of the English Language for anyone who is not a ‘digital native’. Which is why so many books, newspapers and magazines continue their love affair with it.

Times New Roman. I cannot think of a better to spend an afternoon, than to curl with a yellowed book, passed on from hand to hand, with that faint scent which makes me grin and scan page after page of gorgeous Times New Roman, looking at not just the type but feeling the spaces in between.

Talking about reading, Steven Levy believes our very mode of reading will change soon. For more than one reason. Check out The Future Of Reading. But I guess maybe that belongs in a different post.